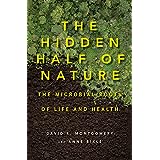 There’s a great article in The Guardian I stumbled across the other day that tells the story of Anne Biklé and David Montgomery and their experiments in their own garden and their discovery of the impact of soil health on human health. This journey led to their writing the book The Hidden Half of Nature: The Microbial Roots of Life and Health.

The article tracks their interest in trying to figure out how they were able to build soil so fast in their garden and what was happening to shrink all the compost they were applying to such small amounts of nutrients doing such incredible work. Of course, they learned about the incredible microbial world below ground teaming with life doing all the work that allows us as humans to do all the work we do. Of greatest interest to them was the symbiotic relationship between the plant roots and the microbes.

Of course, what was exciting to me was that we have more urban people really beginning to understand the power of that symbiotic relationship and how we as humans can get involved and be a part of that synergy rather than hindering that relationship. Likewise, as more people make the connection between soil health and the agricultural management that influences that health, I believe that more consumers will begin to vote with their dollars for that good management, like supporting Holistic Management practitioners who are improving soil health and growing nutrient-dense food.

When Anne was diagnosed with cervical cancer and realized that there was a microbe, the HPV virus [Human papillomavirus], involved in this disease, it caused her to look at how the microbes in us and what we do to them through our actions, influence our health. As she changed her diet, other illnesses she suffered from went away. Diet became about feeding the right microbes so they could do their jobs. In this way, they ate to feed not just themselves but their microbes.

Ultimately, that is how consumers become co-producers–supporting the agricultural producers who are building soil and growing food that feeds our bodies and our microbes.